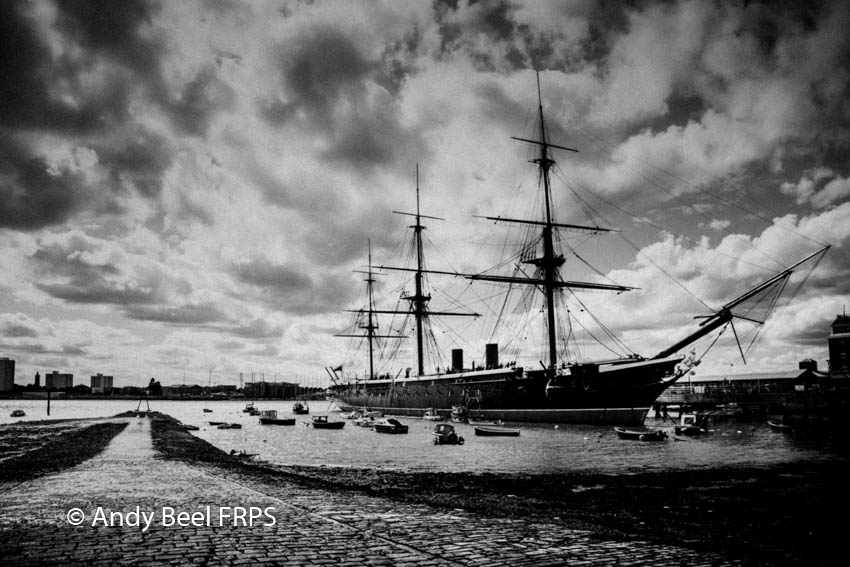 HMS Warrior, Britain’s first iron-hulled, armoured battleship. Launched in 1860, at a time of empire and Britain’s dominance in trade and industry, powered by steam and sail, she was the largest, fastest and most powerful warship of her day. Portsmouth August 2014.

I have known for a while Japanese art of the 19th century has influenced European art and photography. However, until recently I was not aware of where and how this influence plays out. Consequently, in this post, I will discuss some of what I have discovered so far. For instance, read on to find out how gunboats played their part in changing art. Similarly, in the compositions of Impressionist and Post-Impressionist painters and current photographers.

There is a wealth of information to get your head around when learning about something new. In my case it is paintings. There are many styles, picture genres, artists and schools of artists. As a photographer, I have long been interested in paintings. Additionally, my real interest in art begins when the subject matter becomes contemporaneous with the time of the painter. Therefore, this removes the majority of the subject matter before 1600 for me.

In addition, the church of Roman commissioned much of the artworks in the period between 1200 and 1600. I won’t be side-tracked into a cul-de-sac about the vanity and miss-management of funds by the Roman Catholic church. However, the phrase “Ye shall know them by their fruits” Matt 7.16 KJV will suffice. In other words, how different would the history of painting be without the money provided by the Catholic church for the Italian Renaissance? 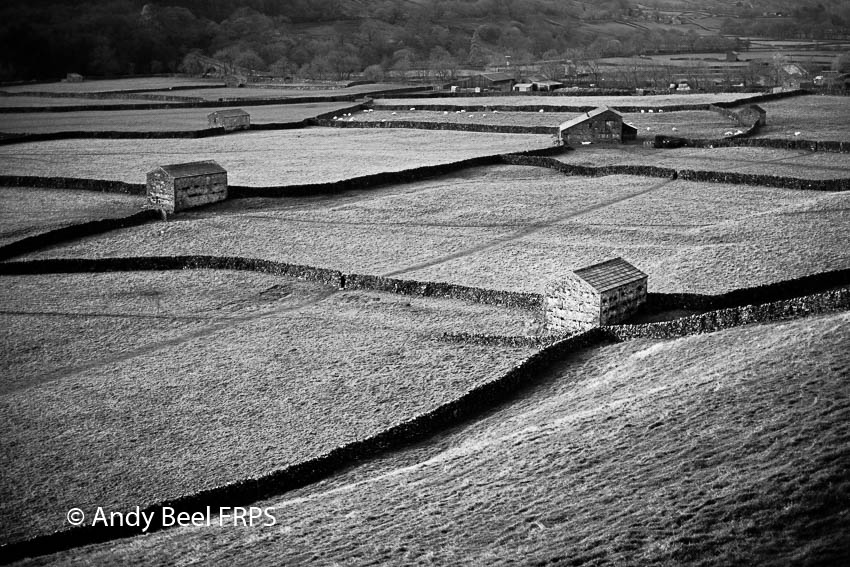 We all know every artist has their way of seeing and making marks on a canvas. In short, western art had been through many twists and turns of style until the middle of the 19th-century. A few brave young people similarly began to look for a truer and more realistic way to express their vision. That new stimulus came from an unlikely source – Japan. A country after all with closed borders and very little artistic influence in the west.

Before I go on, Japanism is a nineteenth-century French term that refers to the popularity and stimulus of the influence of Japanese art in Europe.

Japan was a closed country for 220 years by its own choice. In contrast, the ending of their choice was forced by frustrated hostile American gunboat diplomacy. This leads to, for instance, the opening of a small number of Japans ports beginning in 1858. The increasing monopolization of potential coaling stations by the British and French in Asia were contributing factors. This lead to the signing of the Kanagawa Treaty between the US and Japan. However, before the 1850s the Dutch had an exclusive trading agreement with the Japanese and a small number of woodcut prints were exported to The Netherlands.

Placing art in its historical times

The Belle Époque was a period of French and Western history. It is conventionally dated from the end of the Franco-Prussian War in 1871 to the outbreak of World War I. France lost the five-month war with Prussia. In addition immediately after the war, Paris was attacked by the Communards seeking a socialist revolution. In other words, the French Revolution of 1789 still had unfinished business. The government executed, deported or exiled thousands of Communards. As a result, the realist painter Gustave Courbet like many others Communards fled to Switzerland until a full amnesty was proclaimed nine years later. However, I have found little overt evidence of war and civil war in the paintings of the time.

Remarkably after the short civil war, the Belle Epoque was a period characterised by optimism; regional peace; economic prosperity; colonial empires; and technological, scientific, and cultural innovations. In this era of France’s cultural and artistic climate (particularly within Paris) the arts markedly flourished; with numerous masterpieces of literature, music, theatre, and visual art gaining extensive recognition. 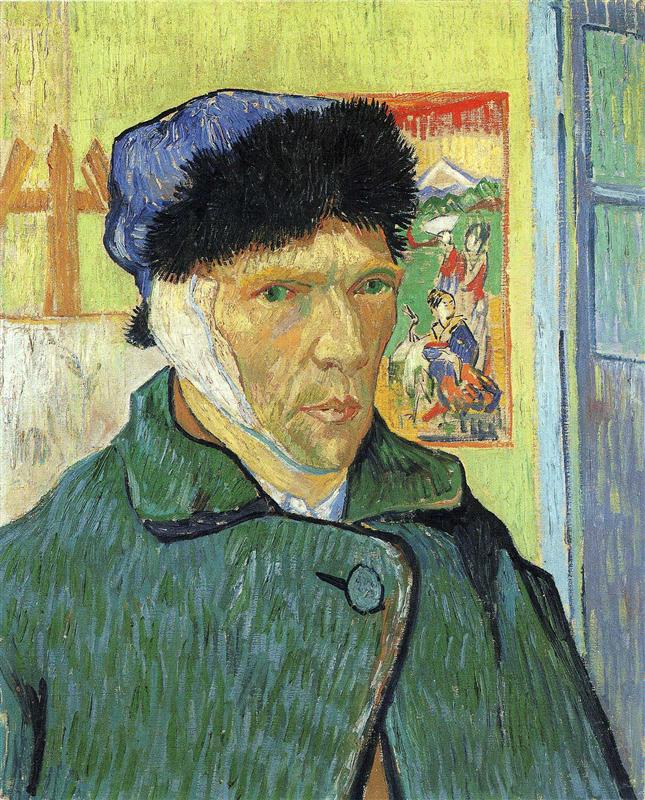 van Gogh – Self-portrait with bandaged ear Arles, 1889. Notice the copy of a Japanese picture in the background.

Who was influenced by Japanese art?

Paris at that time of la Belle Epoque was the centre of the artistic world. Hence, anybody who was anybody was or wanted to, immerse themselves in the visual and literary culture found in Paris. Both painters and writers collected Japanese woodcut prints and included the new and provocative designs in their work.

In France, there was a hierarchy of acceptable Salon painting subject matter. The hierarchy was:

1 History – history painting was introduced in the seventeenth century to describe paintings with subject matter drawn from classical history, mythology, and the Bible. Similarly in the eighteenth century, it was also used to refer to more recent historical subjects.

Jan Cossier The parable of of the prodigal son 1630

2 Portraiture – Manet was castigated in 1863 by all in sundry because of his risqué subjects in paintings such as “Luncheon on the Grass” and “Olympia”. These were named living people that everybody recognised. He was not alluding back to mythological or classical times like the history painters.

3 Animals – George Stubbs was the prominent painter of horses in England from the 1750s onwards.

Constant Troyon Return of the herd  1860

4 Landscape – was the poor relation of the group and began to be more accepted in the mid-17th century with work of Frenchman Claude Lorrain (1600 – 1682) and Thomas Gainsborough (1727 – 1788) in England. Furthermore, the Realist Constable and Romantic Turner were contemporaries and rivals in the 1820s and 30s. 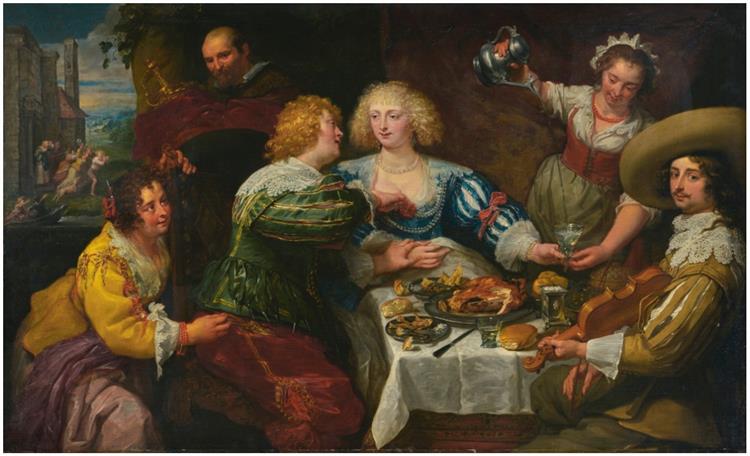 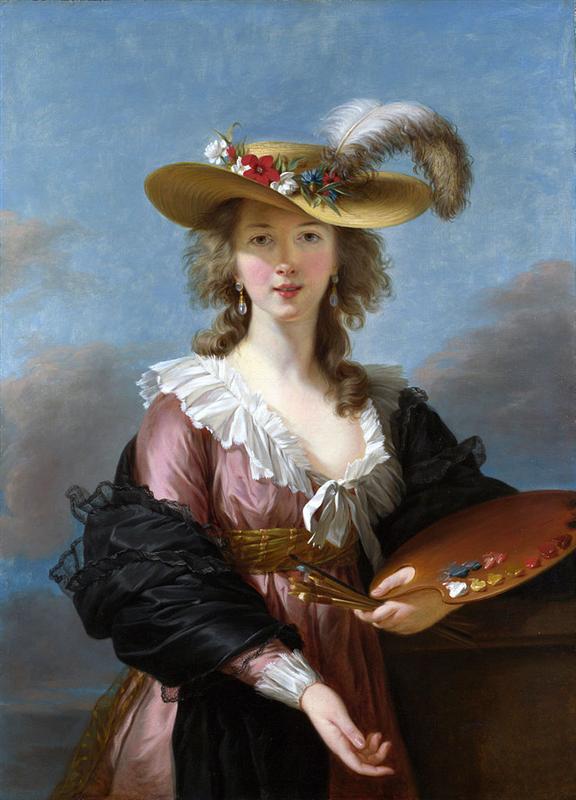 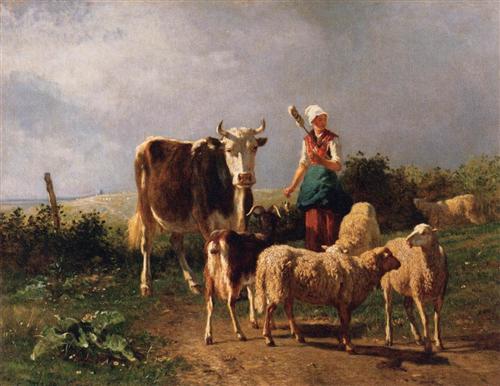 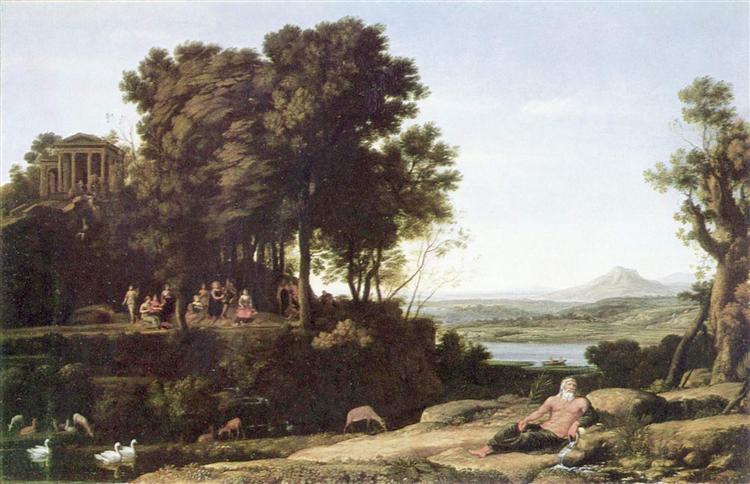 In contrast, the controlling hierarchy of acceptable subjects seems to be non-existent in Japan at the time. These woodcut prints were exported to Europe in increasing numbers through The Netherlands who had an exclusive trade deal with Japan before the 1850s. 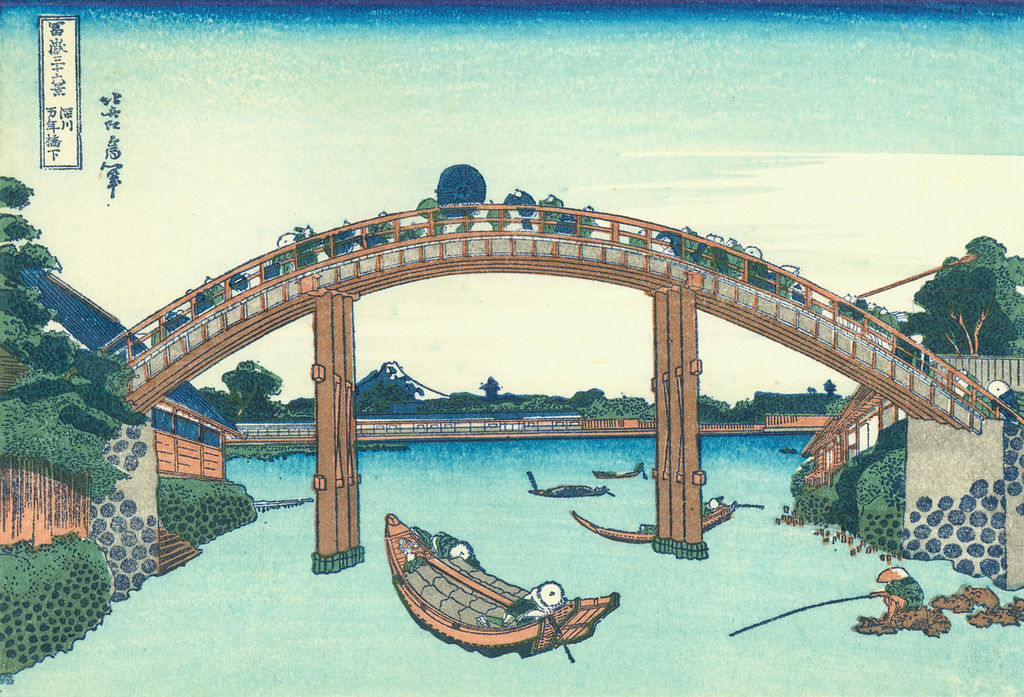 Hokusai – Under Mannen Bridge at Fukagawa (1823) 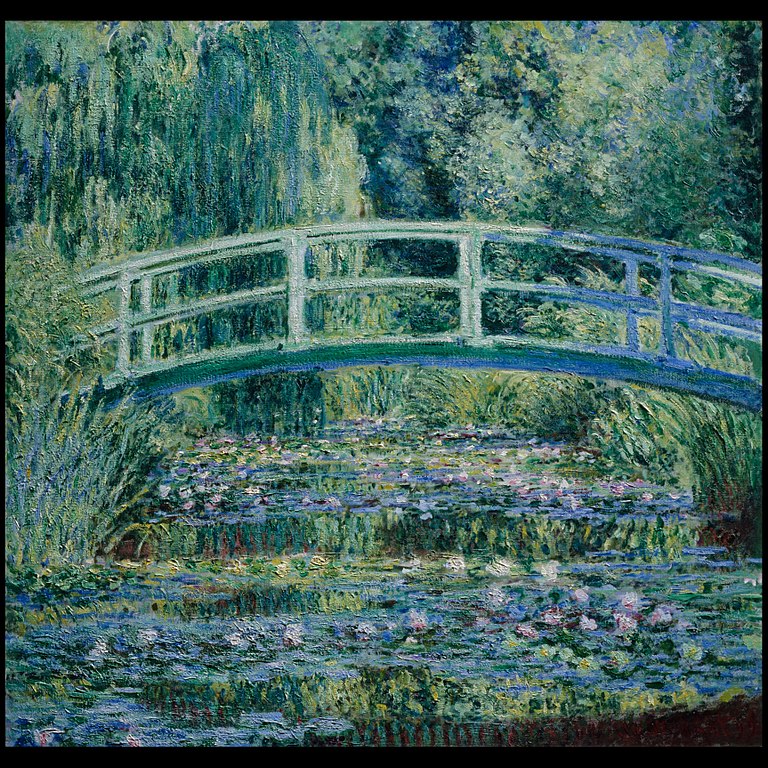 Here is a link to the collection of Japanese woodcut prints held by the Bristol Museum and Art Gallery.

Looking at the collection of prints held in the Bristol Museum and Art Gallery. Above all, my analysis of the Japanese print style is the following graphic elements are found in contemporary subjects. For instance, the choice of subject was completely different from the accepted norms of western art. Similarly, in Japan a minimalist style of painting from around the 1830s becomes popular. 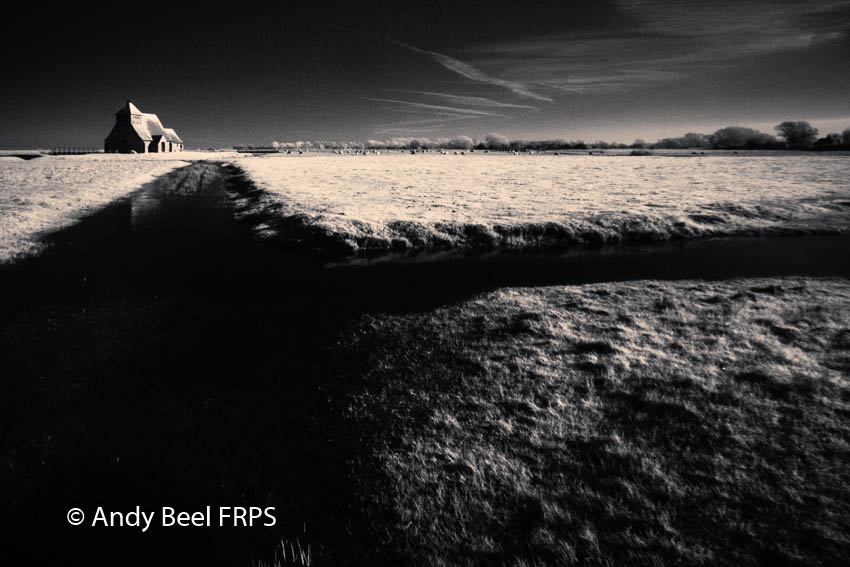 Here I am, a photographer describing the compositions I see in Japanese prints of the 19th-century in terms that are in use with photographers of the 21st-century. I wonder how a painter now and then would describe these techniques? The vocabularies used in both artistic mediums must be different and changed over time.

The Creatives view of the Daguerreotype photography process when it was first invented in 1826 was a range of musings from the wildly enthusiastic to total damnation. For instance, writer Edgar Allan Poe described it as “the most important and perhaps the most extraordinary triumph of modern science”. Similarly, the English Victorian Art Critic John Ruskin called photography “the most marvellous invention of the century”. Perhaps rather fanciful views I feel.

In his view, art was derived from “imagination, judgment and feeling but photography was mere reproduction which cheapened the products of the beautiful”. The poet did have his portrait taken in 1855 & 1863 where he looks most unhappy in both. After all, his grumpy expression may have more to do with the need to keep still for the exposure of several seconds than his views on photography. The sensitivity of the Wet Plate negative was very low at the time. 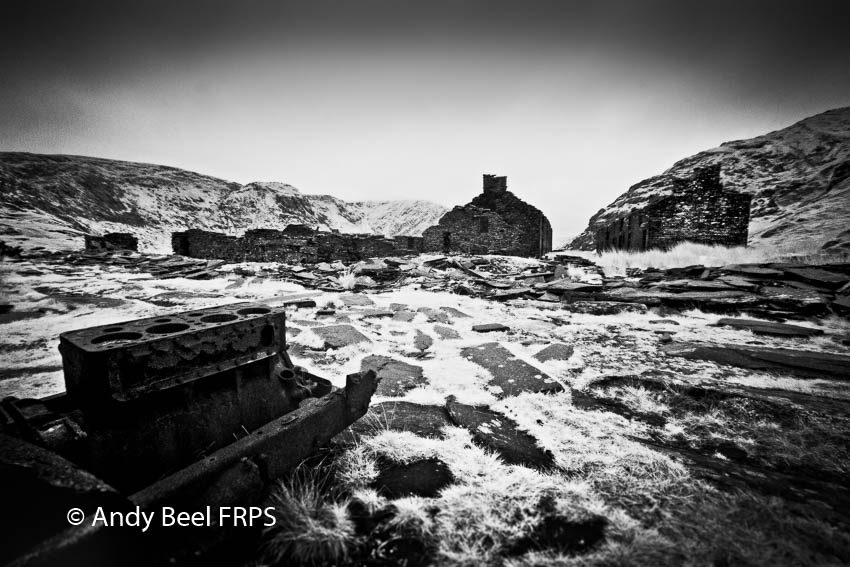 Initially, photography would not have had any practical use for a painter. Initially, this is because of its extremely long exposure times and difficulty in processing. However, by the time of the introduction of mass-produced Dry-plate glass negatives in 1879, this meant the plate did not have to still wet to be developed. The need for a portable darkroom was over. With the time constraint eliminated a new industry was born developing and printing. Above all, the sensitivity of dry plates had improved by up to 60 times, hence, exposure durations were now in parts of a second rather than seconds or minutes.

Amongst those painters who could see the practical uses of photography particularly in portraiture for capturing a fleeting moment were Cézanne, Degas, Gauguin, Toulouse-Lautrec, Tissot, Watts, Munch, Eakins and Merritt-Chase in the US. I know the date range of these practitioners is quite wide but plausible.

Why is the medium called photography?

Probably most photographers know the term photography means light drawing. British chemist John Herschel made many contributions to the new field of photography. For instance, he invented the Cyanotype process. He was the first to use the terms “photography”, “negative” and “positive” in 1839.

The influence of the Japanese on western paintings is quite easy to find with a little persistence. In contrast, its influence on photography is harder to trace. I hear whispers but who influences who, why, when and where is a harder nut to crack. In addition, the names and styles of Japanese photographers are largely unknown to us in the west. After all, we in the west tend to seek inspiration from photographers of Europe and the US.

With a random internet search, I found the following Japanese photographers.

Daidō Moriyama, he received the Infinity Award for Lifetime Achievement from the International Centre of Photography in New York in 2004 and the Hasselblad Award in 2019.

Hiroshi Hamaya was the first Japanese photographer to join Magnum Photos: in 1960, as an associate member. He received the Master of Photography Award from the International Centre of Photography (New York) in 1986. 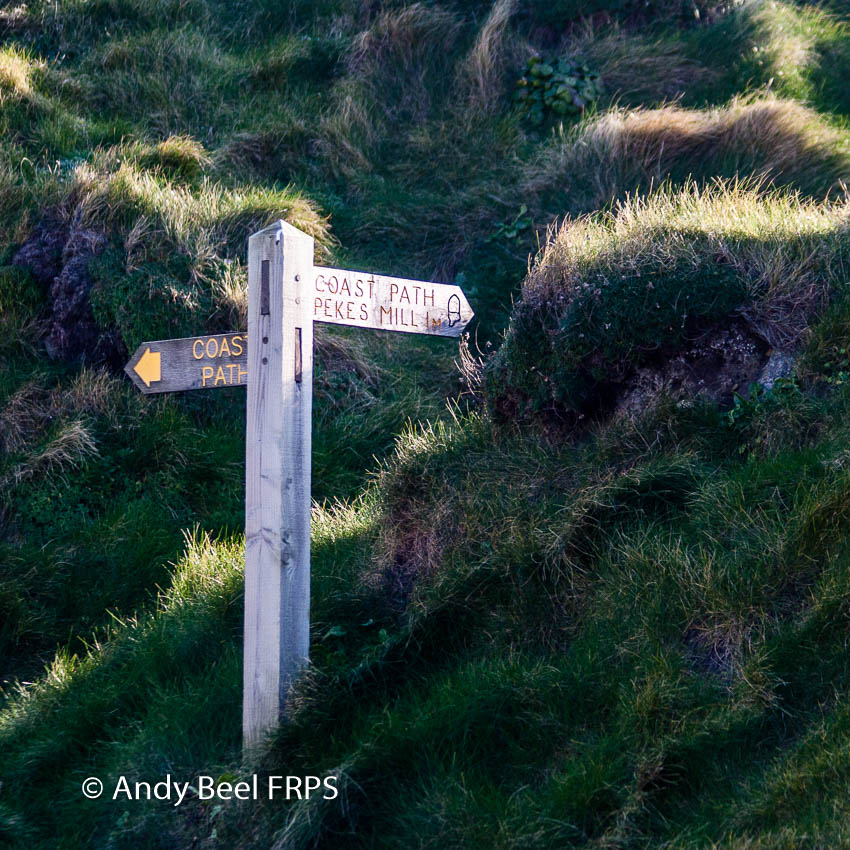 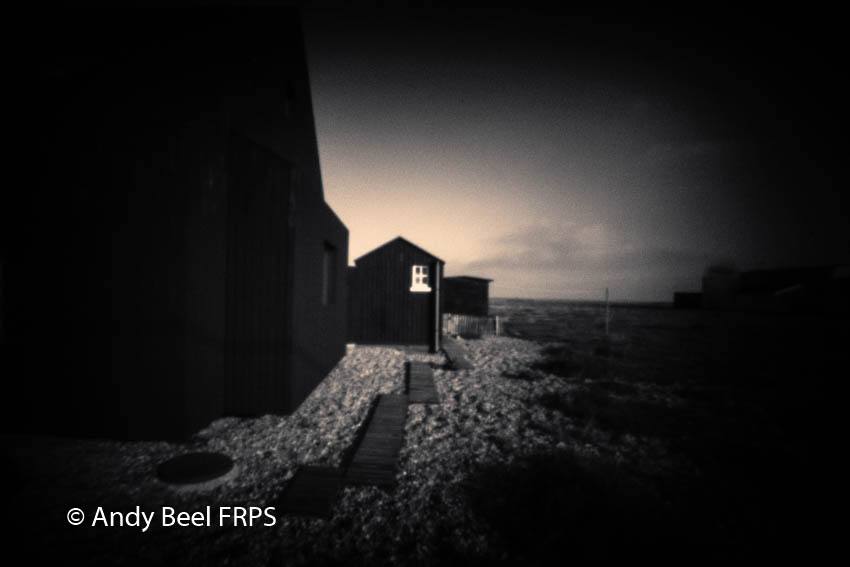 In conclusion, how explicit the influence on western photography by paintings from any age or culture, is difficult to say with any certainty. Therefore, my feeling is the majority of practitioner’s using either medium have largely referenced their methods typical sources. Also, there will be another sub-set of artists who may have had a brief dalliance with the new and went back to familiar ways. There will, of course, be a small number of renegades who break away and look for new influences in the non-standard places. Above all, this new influence from the East is wonderfully demonstrated by the initially ridiculed pioneers of Impressionism.

All of these 19th-century Japanese compositional tools seem very familiar to us now as photographers in the 21st century. The tools available in visual design for expressive photography may in part come from a rich heritage originating in Japan.

In sum, these composition design aids include a contemporary subject matter, imagination over topography (what is there!), a reduction in detail, wide-angle with a truncated foreground, wide-angle vertical format, diagonal lines & imaginary vanishing point, plain backgrounds, high viewpoint, asymmetric composition and a tight crop.

Personal recommendation is the best form of testimonial.”